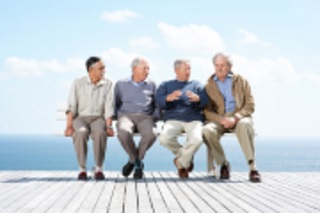 The Alexander Technique for seniors is a system of re-education in terms of posture, balance and movement in everyday activities, which aims to improve physical and mental well being and bring about relaxation, by activating natural reflexes

When older people lose confidence in their ability to do things they like to do, it usually doesn't happen just because they are aged. It's because they have allowed chronic tensions deny them the skill to move more easily and safely.

Here is the good news for older adults:  the ‘natural’ signs of aging...painful and stiff joints, decreased mobility, and poor balance, can be delayed until you are 80 and beyond.

The Alexander Technique for seniors explained

The Alexander Technique is one of the most intriguing self-improvement practices which I have researched and experienced.

That should make you sit up and listen, but I don’t want you to sit up and listen the way you normally do!  But, of course, you are sitting the way you always do, because it feels right and normal and comfortable. And yet, when you look around you, you will observe that there are a great variety of views on what is the ‘right’ way to sit or stand.

For healthy ageing you may have to make some changes.  The problem is some changes involve working against the habits of a lifetime.  Most of what we do is habit.  Think about your daily routine.  Some habits are good, and save time and energy.  Some are bad and you would prefer to break them...smoking, over eating, excessive drinking, frowning and slouching.

The Alexander Technique promotes change by helping you to stop doing the wrong things, before moving on and doing the right things

It is a system of re-education in terms of posture, balance and movement, in everyday activities, such as bending, sitting, standing, walking, writing, which can lead to improved mental and physical well-being.

F.M. Alexander was born in Tasmania in 1869.  When he was still only 19, his successful career as a Shakespearean actor was threatened by a persistent tendency to lose his voice when performing.

When doctors could not identify any physical reason for his problem, he decided to seek a remedy himself.

Since he did not have a problem in everyday conversation, he concluded that he must be doing something wrong on stage; he must be causing the problem himself.

Alexander decided to observe himself using mirrors, first when speaking normally, and then when reciting, to see if he could detect any differences.

After years of painstaking research he found the answer, and his voice problem was resolved.  And most significantly, his general health greatly improved. One of his key observations was that as he began speaking, he had a tendency to pull his head back and downwards.  This disrupted his breathing, vocal mechanisms, and posture. The problem was how to stop doing this, since he was completely unaware of this behaviour when on stage. This lead to the discovery that we have faulty sensory awareness, our sense of what felt right about our bodies was unreliable.

He then realized that it was impossible to separate mind and body, thinking from doing, and that was a revolutionary philosophy for his time. His problem of bad posture was the end result of deeper wrong processes, involving the whole person.

At first he thought he was pursuing a solution to his own unique voice problem, but he soon realized that he was developing a remarkable system for improved mental and physical well-being, which would have universal application, and appeal.  And in the context of this article he had discover a mind body skill for healthy ageing.

This need for this technique stems from the conditions of our modern lifestyle; hours spent at desks or slumped in cars, which have caused most of us to lose the instinctively good body use still to be seen in very young children.

Most adults have poor posture and move muscles and joints incorrectly.  We put far too much effort into everyday activities such as bending, sitting, standing walking writing, even brushing teeth.

We don’t realize this until things go wrong, because our bad habits of walking, sitting and standing, now feel natural. Chronic ills such as back ache, neck pain, rheumatic disorders, plus-considering the mind/body interaction-a host of stress related and psychosomatic disorders are the consequences.

But the good news is that whatever your age or condition, that original childlike poise and economy of movement, is still within you, lies dormant, and can be reactivated with the help of an Alexander teacher.

An Alexander Teacher can show you in weeks what it took Alexander years to discover, but the pupil takes ultimate responsibility for his own progress.

We are not trying to eliminate tension, of course.  We need a balance between muscle tone and relaxation for vitality.

The Alexander Technique teaches you to stop, and gives you a choice on how to react, instead of allowing yourself to be driven by habit to react as you have always done in the past.

Self-improvement via the Alexander Technique for seniors 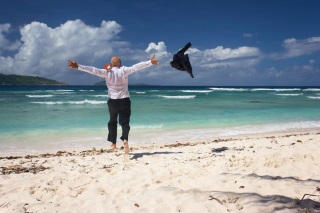 Self-improvement for seniors requires change...changing yourself, not the world, not other people.

And when you think about it...what determines the quality of your life?  Not, I suggest your fifteen minutes of Warhol fame, not the big events of your life, but the way you conduct yourself during your 'three score and ten' years of daily routine.

The Alexander Technique for seniors can make that routine better for you and when that happens, who knows what happy and unexpected benefits may follow.

Back to retirement-stories.com's Home Page