Peter the Great was billed as one of Europe’s top 5 Hypnotists, so when he called for volunteers for his Stage Show, I was first in line!

Why did I volunteer, what happened, and what was it like? Did he have me barking like a dog, or chasing Leprechauns? Well no, but I did do some unusual things that I wouldn't normally do in front of 200 people, or would I...

The first thing to bear in mind about Stage Hypnosis is that the purpose is entertainment, and the participants are volunteers, some of whom will be screened out. It’s a numbers game. In any audience you are going to have a percentage of people who will be open to the possibility that they can be hypnotized, and are willing to participate.

The reason I volunteered was because I have been trained in Hypnosis, and I wanted to see what it felt like to be the subject in a stage show. To me it was a test, a challenge to see if I could be hypnotized under such circumstances. I was on holidays. I was up for some fun. I was going to be authentic, I wasn't going to fake it, but I wanted to be successful.

The preparation for the trance is all important. By the way, hypnosis and trance are interchangeable words for the phenomena I will describe, and you have all been in trance many times. You do know that, don’t you?

Trance is a normal everyday occurrence and a light trance will feel no different from relaxation. Some examples: you are watching Television and someone is talking to you and after a while you ask “What did you say...?" Or you step into an elevator, the doors close, you look up and watch the numbers go by one...two...three...four...five...the doors opens, you step out and say, “Is this seven?”

And what about the driving trance? Driving along, taking in the sights and the sounds, listening to the radio, you’re thinking life is good...then you realise that you are miles beyond where you should have turned. You drive through the traffic lights, were they green? You search for your car keys and you find them where you've already looked! That’s called negative hallucination. So trance is a normal everyday occurrence and the skill of the hypnotist lies in his ability to put you into that state, with your cooperation.

The Show's The Thing 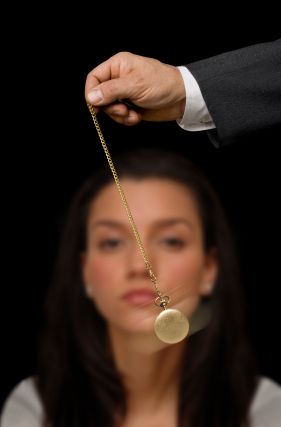 So on with the show. The volunteers take their seats on the stage, about 10 of us, and Peter the Great starts his pre-talk. “Do not be afraid, no harm will come to you, you will not be made to look foolish. People who are hypnotized say afterwards it was a wonderfully relaxing and enjoyable experience. Don’t expect to feel hypnotized  do expect to feel relaxed. Listen to my voice and the music. Stare at the center of my forehead...follow my fingers, close your eyes. You will not sleep; you will always hear my voice and when you come out of this trance you will feel wonderfully relaxed and refreshed.”

That’s an attractive promise and you can see why you might want to stay on the stage and be successful.

He then took us through a series of tests, which were  designed to convince us that we were open to suggestions and could be hypnotized  For example the dictionary and balloon test. We were asked to stand up, hold both hand outstretched, close our eyes and turn our right hand palm down. It’s would be easy to cooperate with that? Next, imagine there was a balloon attached to your right hand and a very heavy dictionary in your left hand. Yours hands would move in opposite directions, without conscious effort.

A second suggestibility test was to clasp your hand together and press them down on your head, again easy to comply. He then told us that we were unable to open them. If you could, you are off the stage! Was I hypnotized?  Who knows, who cares, it’s only fun and I wanted to play!

Next we were asked to imagine (follow his suggestions) certain situations which were easy enough to comply with. For example: Imagine you are on a beach and it’s very hot, or very cold, you are at a very funny movie, rotate your hands faster and faster, stand up, sit down, you are a goldfish! You are a washing machine, that’s trickier-but by now the possibilities for cooperation and fun are expanding. My attention was narrowed so that I was barely aware of the audience and I was listening intently to his instructions.

He then asked us to stand up and open our eyes and I noticed that he had dismissed half of the volunteers, until there were just five of us. I’m glad I succeeded and I wanted to continue.

The suggestions got progressively sillier and more challenging! The person along side of you has smelly feet, move away from him. He smells beautiful, under his arm pits, move closer. You can speak Japanese, you are a Jack Hammer. You are a traffic warden; go around the audience giving out fines. Silly stuff, but harmless and you wanted to stay involved.

And then he steps up the pace...to musical accompaniment I was a tap dancer, a ballet dancer, a flamenco dancer! I’m glad he didn't say disco dancer, because consciously and unconsciously I know I’m no John Travolta!

And next I’m a lap dancer and I must seek out as many men as possible to perform for. This was getting close to being asked to rob a bank, but what the heck, I’ll do it anyway!

The final act in the show was for Peter the great to install a Post Hypnotic suggestion. A post hypnotic suggestion is one given when you are in trance, to be acted upon later when you are in full awakening consciousness. This is where you hear stories of people chasing leprechauns, having just left the theater  In fact this should never happen. A responsible hypnotist always should conclude the show with a phrase such as “Any and all suggestions I have given you for the purpose of this demonstration are hereby removed and will no longer affect you when you leave this theater.”

The post hypnotic suggestion was that when we heard the 007 theme music we would immediately hop up from our seat and adopt the James Bond persona.

He then brought us out of the trance, by counting from one to five, thanked us for being such good sports and called upon the audience to acknowledge us, which they did with great enthusiasm. This rewarded and affirmed our participation.

Let me recap on how stage hypnosis works. The purpose is entertainment. The participants are volunteers and are screened for suitability. You are aware of everything that is being said and it requires your active cooperation. The warm up is designed to eliminate any concerns you have about the process and you are lead gradually into cooperation via a series of progressively more daring suggestions.

Afterwards some members of the audience said I was “terrific”. What did they mean? That I was a terrific actor or hypnotic subject? Was I hypnotised? Who knows who cares! I didn't feel hypnotized but I was certainly in an altered state of consciousness, and that is what hypnosis is! I always felt in control and believed I could snap out of that state at will.

How does hypnosis work? We have what’s called a critical faculty in our minds that helps us distinguish between reality and fantasy. Tom Hanks was not on Apollo 13. Sylvester Stallone was not the heavyweight champion of the world. You cannot get on a plane in New York and be in LA 30 seconds later. And yet we have no problem accepting those ideas when we are watching a movie. In hypnosis the screen is inside your mind and the image you co create with the hypnotist is a new you. That’s how hypnosis works.

In a stage show the participants are not pretending. Some of them genuinely imagine they are tap dancers, while others carry out the suggestion without questioning, because they have suspended the critical faculty.

I started to head back to my seat. The theme from Gold finger began playing, I hesitated for a moment, did I want to play the suave hero? No, for me the show was over, there was a lady waiting for me outside. It was time to get back to the real world. I exited swiftly and confidently, stirred but not shaken.

The final act in the show was determined by me, not by Peter the Great.

I hope you enjoyed this story. Please share your Retirement Stories and Anecdotes! Everyone loves a great story!

Stay in touch and subscribe to my monthly email newsletter, "Retirement Stories". It is full of new stories and tips on planning for and enjoying an active retirement.